Posted on September 10, 2015 by UncommonLoon

Although seemingly irrelevant, the title of my blog actually has meaning to me beyond just an oh-so clever play on the common name for a Michigan bird. When I was about four years old, my parents purchased a small cottage in Mecosta, Michigan. Mecosta is a city most would consider within the catchall distinction of podunk nowhere. The “city” consisted of two bars, a gas station, and a combination laundromat and video rental store. Yes they were attached. Yes we used both of them. Anyway, the cottage was on a tiny but pristine body of water appropriately named “Pretty Lake”. My family had this cottage until they made the difficult decision to sell it during my freshman year of college, so about fourteen years. Thus the majority of my childhood summers were spent swimming, playing outside, getting bit by mosquitoes, and most importantly, pestering wildlife in every possible way. I am under the impression my career pathway (if you can even call it that at this point…maybe “life focus” would be a better choice) was hugely influenced by the amount of time I spent outdoors looking at, listening to, and wrangling wildlife during my youth. One of the more illusive creatures that could be found intermittently on Pretty Lake was the common loon (Gavia immer). The loon’s unmistakable, haunting call is as much as part of Michigan lore as drowsy mother bears and cryptozoological dog men. If you haven’t heard a loon’s call, take a second to Youtube that shit right now. I’ll wait here.

Perhaps this bizarre, eerie sound is the origin of the second dictionary definition for the word loon: a crazy or simple-minded person.

In addition to their unique vocalizations, loons are also just gorgeous birds. Breeding adults boast striking plumage of black and white and fiery red eyes. I wouldn’t go as far as to say loons are my spirit animal, especially since I’m not generally a bird person, but I’m a pretty big fan of these guys. Unfortunately loons, like many other threatened species, are dying in droves at the indirect hand of man. The mechanism is complicated, so much so that it requires an entire DNR poster in state parks and national lakeshores to explain it. The simplified version is this: humans introduced two non-native species to the Great Lakes and inland lakes of Michigan, zebra mussels and round gobies. Zebra mussels are filter feeders, meaning they eat by filtering tiny organisms out of the water they live in. Zebra mussels are so good at being zebra mussels that they have actually begun over-filtering Michigan waters, creating clarity levels that are not natural for these ecosystems. The clear waters allow for increased light penetration, which allows for increased algal growth. The algae grows at such a rate that it creates mats in which algae becomes smothered, dies, and begins to decompose within the mat. The rotting algae is a prime breeding ground for the Botulism toxin, a bacterium that causes a dangerous disease by the same name. This is where the second exotic, the round goby, comes in. Gobies swim among the algae beds, eating worms and other small organisms that have consumed the rotting algae, and they thus contract the Botulism bacteria. When loons and other shorebirds eat gobies containing the toxin, they contract Botulism and die.*

Recently I went on a short backpacking trip on North Manitou Island, one of the two “cubs” off the shore of the Sleeping Bear Dunes (if you don’t know the Native American tale about Sleeping Bear, it’s worth checking out). I had a fantastic time exploring the island and was met with breathtaking beauty at every turn. That is, until I encountered at least seven dead or dying loons in a row along the southwestern shore. I say dead or dying because two of the loons I encountered were still alive, suffering from what appeared to be paralysis and “limberneck”**. This was extremely difficult for me to see, especially since I knew there was nothing I could do to help the suffering birds. The enthrallment of backpacking in rustic, backwoods beauty became painful, lingering guilt for the damage our species is causing to the others we share this planet with. My boyfriend and I hiked back to our camp feeling sad, angry, and defeated. Even here, what felt like a million miles away from civilization, we could not escape blatant signs of ecological degradation. I was having flashbacks to Playa Llorona in Costa Rica.

Although this may seem like a downer of a post (probably because it is) I feel it’s important to talk about these experiences. If every person was forced to walk pass a suffering animal on a beautiful beach, knowing full well its suffering was caused by the actions of man, the world might look a little different. In the words of Gretchen Wyler, “we must not refuse to see with our eyes what they must endure with their bodies.” I want people, especially those who spend time enjoying natural resources, to understand our actions do cause real, observable consequences. It may seem a hopeless plight for loons and other species affected by invasives (such as ash trees, a species I work with every day). After all, the invaders are already here. What can we possibly do at this point? Yet it is always advisable to educate yourself. It amazes me how often people come upon our research in state and metro parks and have no knowledge of emerald ash borer or have even noticed ubiquitous death of ash trees across the state. These are people who have chosen to spend their day hiking, fishing, or otherwise enjoying a natural area, yet they are completely out of touch with forest health.

When you see something strange, like thousands of dead trees in an otherwise healthy stand or several dead birds along a pristine shore, ask yourself why and then go find the information. In my opinion, the most important thing we can do for our ecosystems at this point is just to give a damn. To have a sense of stewardship for the lands we inhabit. And not to turn a blind eye to the environment five days out of the week only to enjoy the fruits of nature, conversationalists and wildlife managers on the weekends. The Internet is a powerful tool and no one needs a degree in environmental science to be a steward. If you’re interested in learning more about the species I mentioned or how the average person can prevent or inhibit the spread of invasive species, check out the links I’ve shared below.

On a brighter note, here are some nice shots from the trip: 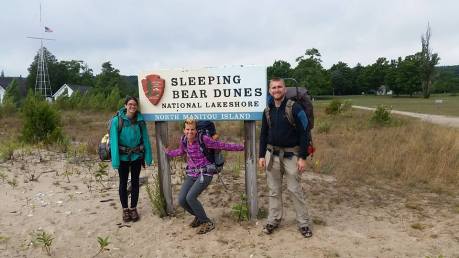 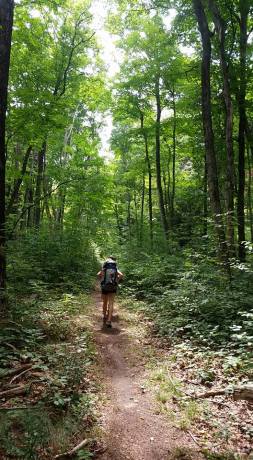 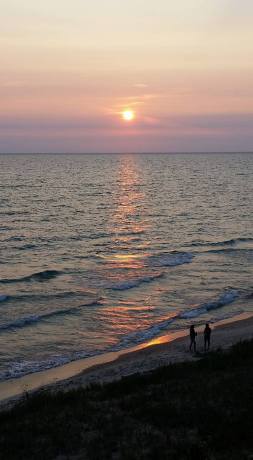 Logan is officially a backpacking doggo. ✅
There's some PNW vibes going on in Michigan lately with all this rain.